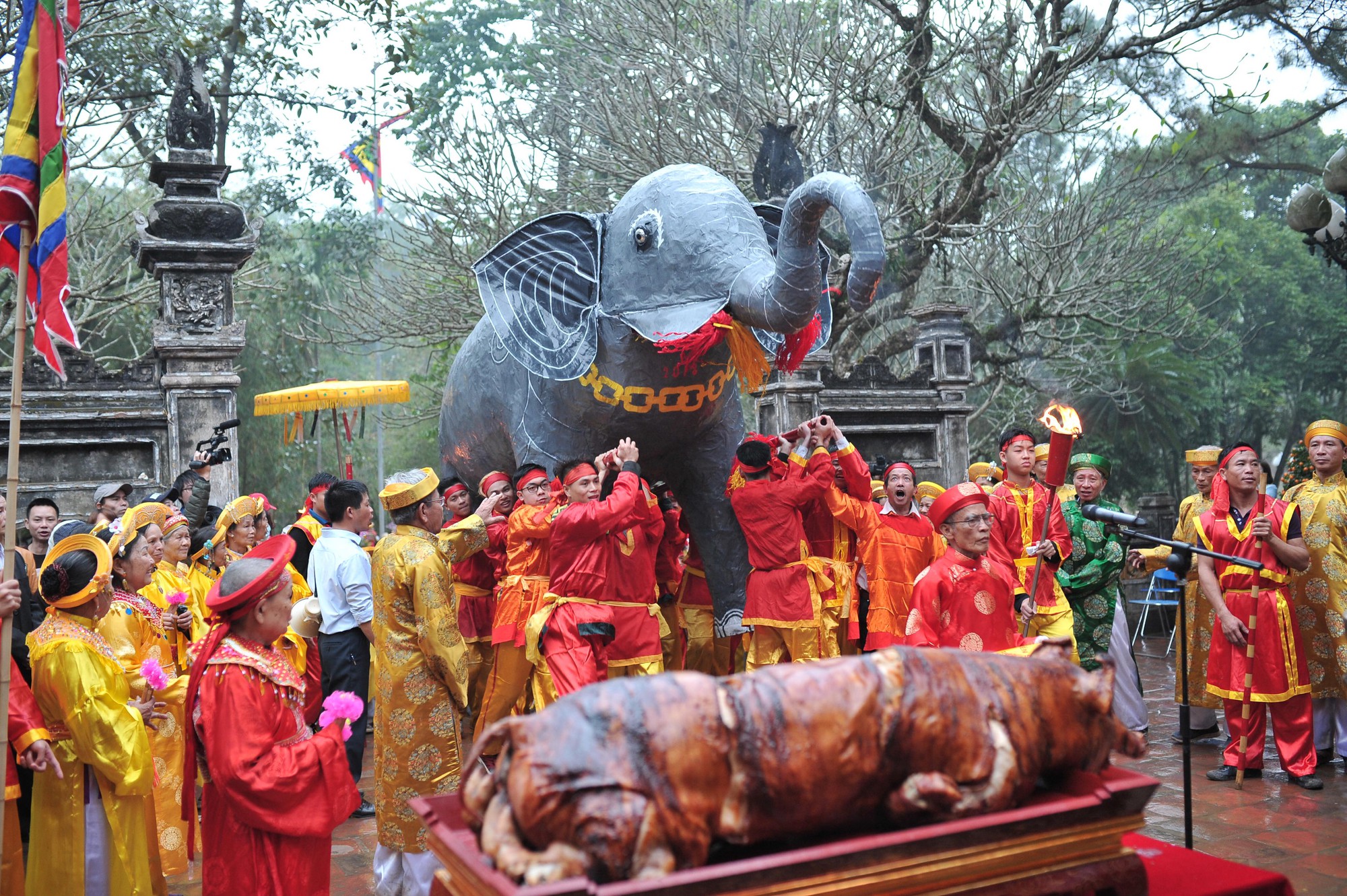 According to the legend Saint Giong this was the place where flew back to heaven on his horse after defeating foreign invaders. I feel it in the voice of local guides as they show me the wonders of the region. Color abounds in the area, turquoise blue lakes – believed to be the footprints of Saint Giong’s horse – contrast against the palate of green mountains, hills and trees that mingle softly with the local bamboo, said to be colored yellow from fire from Saint Giong’s horse. White stones intersperse the soft colors, giving the place the look of a painting.

The most important feature of the temple buildings is the main altar, made from a mixture of clay, sugarcane juice, paper and lime It is unique in Vietnam and forms the shape of the mountain ranges surrounding the complex. Seven statues are worshipped at the temple. The back of the altar opens into a cave, that can be explored if you enter from the left and exit from right.

Stopping in the middle of the cave and looking towards the statue of Saint Giong, visitors should take a deep breath to receive the “holy” air from the back of the statue. Mid way up Hon Da Trong Mountain there is a big white stone, cleft in two, that locals believe is Saint Giong’s amour, at the peak I admire the view and am told a statue of Saint Giong will be placed in time for the 1,000th anniversary of the founding of Thang Long-Hanoi in 2010.

During the sixth Hung King dynasty (around 500BC), Vietnam was threatened by the kingdom of Yin, to the north of Vietnam.

King Hung was worried and assembled his court to prepare the defence of the country. A mandarin of the civil service reminded the King that the original founding King of the country, Lac Long Quan (the Dragon King of the Lac Tribes), had said that if the country were ever to face danger, it should pray for his help.

The king then invoked the spirit of the founding King. Three days later, a very old man appeared in the midst of a storm and said that he was Lac Long Quan himself. He prophesized that in three years Yin’s troops would invade. He asked the King to send messengers all over the country to seek help, and prophesized a general sent from heaven would come to save the country.

A few years earlier, in the village of Phu Dong, in the northern province of Bac Ninh, a woman in her sixties reported she had seen the footprints of a giant in her field.

Amazed, she tried to fit her feet in the footprints and suddenly felt that she was overcome by an unusual feeling. She became pregnant and delivered a boy whom she named Giong. Even at the age of three, Giong was not able to crawl, to roll over, or to say a single word.

Surprisingly, on hearing news the King had sent a messenger to the village asking for help, Giong suddenly sat up and spoke to his mother, asking her to invite the messenger to their home. He then instructed the messenger to request the King to build a horse and a sword of iron for him so that he could go and chase the invaders away. When the horse and sword were eventually brought to his home, Giong stood up on his feet, stretched his shoulders, became a giant of colossal proportions, and asked his mother for food and new clothing.

Giong put his helmet on, carried his sword, jumped on the back of his horse and rode away, as fast as a hurricane. The iron horse suddenly spit fire, and brought Giong to the front line at the speed of lightning, he quickly defeated the invaders.

Afterwards, he left his armour on Soc Mountain (Soc Son District, Hanoi) and both man and horse flew into the sky.

In recognition of Giong’s achievement, King Hung proclaimed him Phu Dong Thien Vuong (The Heaven Sent King of Phu Dong Village). To the Vietnamese, he is better known as Thanh Giong (Saint Giong).